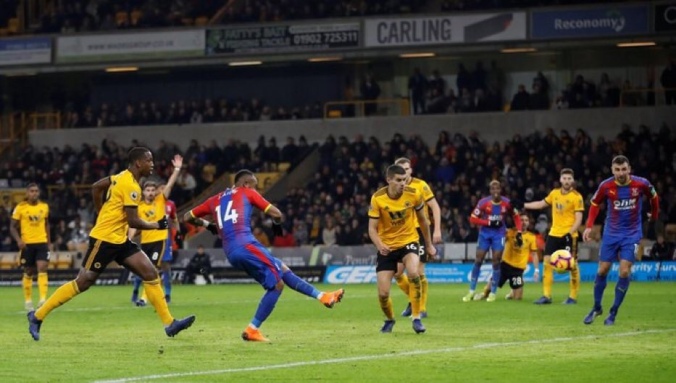 Spurs had us on a drunken, almost nauseating high that we eventually had to come down from. This was the hangover from hell – vomiting, headaches and diarrhea all at once.

Crystal Palace, a team we had beaten previously, were in town. We sit relatively pretty in the top half having comfortably dealt with a team who were being spoken of as title contenders. We’re all becoming a little bit used to teams with any semblance of a proactive game plan stopping us from playing.

Watford, Cardiff, Huddersfield, Newcastle, Fulham. And now Crystal Palace. These are all teams below us in the table, who have paid us the utmost respect by adopting game plans that stop us from operating in the way we would like. This might sound like a simplstic prism through which to view these games, but it’s shocking how little respect is paid to the opposition at this level, as Wolves themselves have proven against bigger sides. Even though a couple of these results weren’t negative, all of them could have been considered under-par.

Now before I get into the detail of what I want to say, know that I love Nuno, this team and the management off the pitch. They’ve worked wonders to get us into the position we are in. But we have set ourselves up as ambitious. We are talking the talk of an established, elite club that belongs at this level and for the most part we are walking that walk. No one can argue that we don’t look, feel and behave like a Premier League club. But if we want to be that club, there comes a level of expectation with it. With that in mind, standards need to match those expectations and we have every right to speak out if they aren’t hitting the requisite heights.

We’re in that part of the season where we’re playing teams for the second time. You can watch as many videos as you like, but you can’t replicate that muscle memory that’s created when you encounter an opponent. especially an opponent as rigid and consistent as Wolves. What that does mean, especially for a manager as savvy as Roy Hodgson, is that you can study us to death and enact a plan to stop us doing what we’d like to do. From minute one, Palace took the initiative.

The atmosphere was flat, the players looked sluggish and there was a severe lack of progressive football. We’ll always, always have a steady shape and prevent teams from creating chances, but our home form is becoming a concern. I totally understand that Palace are an experienced side at this level, but if – going back to what we all want to be and claim to be – we’re a top half team we need to be asserting an authority over them. At Molineux, we’ve now lost 5 of the last 7.

Our system and tactics have always been our strong suit and we’ve had a cold efficiency about our play that borders on arrogance, a belief that it will all come together in the end. That seemed to overspill here. Beating Spurs does not mean we can waltz into the next Premier League game with a pair of brass balls. I believe firmly in earning the right to play in a game and at no point did we dominate this football match.

I’ve previously spoken positively about how you can almost predict the next pass, such is the learned way in which we operate, but opposition teams have quite clearly wised up to that. Our attempts to keep hold of the ball now seem incumbent on our central midfielders positioning themselves as full-backs, leaving a giant chasm between anybody and Raul Jimenez, perhaps our most important attacking player. Palace simply funnelled us out towards their whippet full-backs and asked us to beat them individually, a battle that neither Ivan Cavaleiro or Helder Costa had the appetite for. Failing that, there is the big switch out to the wing-backs, no? Well even this tactic yielded nothing for us. There is an argument that there were just too many bad performances to be able to muster any kind of attacking quality, but this is happening way too often.

We need to come up with an alternative plan. There was a slight change of emphasis with the introduction of Morgan Gibbs-White, but that fizzled out once Palace regained their composure in midfield. It was simply a case of forcing us wide and asking us to beat them. We missed Diogo Jota, who would have fought manfully to get the better of his man in a way Costa and Cavaleiro just didn’t. Costa and Cavaleiro both seem to need some kind of positive reinforcement within a game to operate and if you get on top of them, they never seem to escape those shackles.

Even if we couldn’t string a couple of passes together in the final third, we would obviously keep them out, right? Palace, of 17 goals all season, with Jordan Ayew as their main striker with exactly zero goals this campaign. But what happened subsequently was entirely a symptom of our lack of fluidity in attack. The crowd gets angsty, the pressure builds, the team gets pinned back, the ball is pinging around the penalty area….Goal. It was no less than we or Palace deserved.

There was a distinct lack of a response as well. We all know we’re better than what we showed, but over the course of 90 minutes, to create as little as we did shows a degree of negligence in my opinion. This kind of performance and result was not out of the blue. We have seen this happen before as mentioned earlier on in the article.  We need more dynamism in the midfield area, because we just aren’t taking advantage of that part of the pitch. Whether that is a formation change, a personnel change or a change of tactic we need to start tailoring our game plans as we are not yet good enough to just impose ourselves on everyone else.

I have faith – if I didn’t I’d be a pretty harsh man – but I also have concern. Again, this is only written in the context of Wolverhampton Wanderers Football Club talking the talk and on occasion walking the walk of an elite football club. If we’re not careful, these infrequent stumbles along the path could lead to a more serious fall.