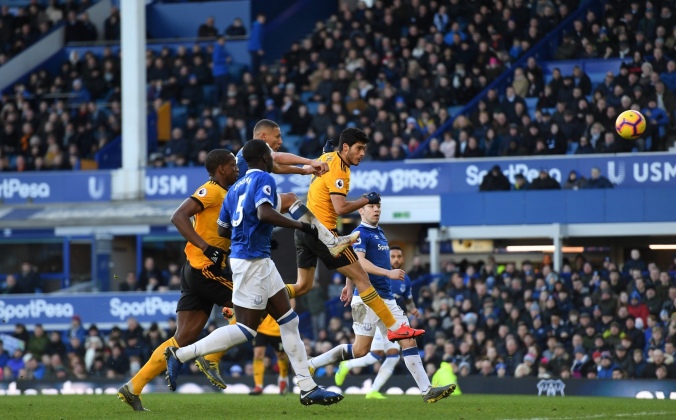 For years it seems, Everton have been held up as the club closest to breaking the glass ceiling. An affable, ‘people’s’ club seemingly downtrodden by the elite and in possession of a blunt instrument with which to crack said ceiling. Even now, flush with cash, other factors are holding them back, whether it be poor management, poor recruitment or just a staleness having been on the outside looking in for so long. Maybe the mantle needs to be handed elsewhere, for another club to stake that claim. Perhaps it’s for a team with a sharper edge to them. Wolves wrestled it away from the Toffees this weekend.

It’s not just the fact we now sit in 7th place, with daylight between us and the rest of the league in both directions. It was the manner in which we picked up our third win in a row. At no point during the 90 minutes did we look in danger of losing that game.

Of course, the narrative has been all about how Everton looked utterly bereft of ideas, soul, application, insert preferred footballing cliche here. But to conclude this is to conclude that teams have the ability to bend a match to their own will and at their own leisure. No team resists this like Wolves. How else do you explain clubs with greater reserves of talent than Everton not being able to penetrate that forcefield defence, not being able to keep a lid on that bubbling attack and not being able to dictate the way a match should be played?

It might just be me, but when I see opposition line-ups these days I’m decidedly non-plussed. I really like Gylfi Sigurdsson as a player. Andre Gomes has impressed me since arriving in the Premier League. Kurt Zouma is a formidable centre back and Coleman/Baines are the epitome of longevity and excellence in the full back position. But none of these players gave me any feeling of concern or anxiety going into this game. And these are players of extremely high value with incredible CVs. But put simply in a match-up against our own? I wouldn’t take a single one of them.

This performance had some familiar traits to it. It had an opposition who didn’t plan with any level of sophistication to stop us playing. Our wing-backs were in the game from minute dot. Our forwards roamed freely, like gazelles on the plains of the Savannah. Our defence stood up to pretty much all tests, bar a stunning strike from Gomes. This was all done against a team with similar aspirations. Leicester, West Ham, Everton. 10 goals, 4 conceded, 9 points delivered. These are just the bare facts. All packaged together and you get an overwhelming sense of belonging, with each performance not just laced with top level quality, but smothered with it and intravenously coursing through it. I try to up my levels of description to try and keep pace with the progression of this team but I’m beginning to feel like I can’t do it justice anymore. These are levels that we’re just not accustomed to. Bring me more Nuno and the boys, just so I can engorge myself on it and hopefully articulate it in some equitable manner.

No man has been more responsible for this elevation than the one who smeared the icing upon this wonderful cake – Leander Dendoncker. The Leanderthal, as my wife called him. Yes there is something quite primitive and animalistic about his play but by no means is this doing him a disservice. No, this boy’s bite matches his bark and he has a refinement to boot. His goal was a reflection of this, thrashing the ball in with an expertly-struck volley – precision and power in equal measure. Nuno’s decision to entrust him with bodyguarding duties for Ruben Neves and Joao Moutinho has worked wonders for this team which went through a spell of self-reflection. For so many, with a transfer window available to us, the easy option would have been to look externally for the answer to our problems. But even within this relatively small squad, the resourcefulness was there. Don’t let it be forgotten that Nuno had his reservations about Dendoncker. In many ways, he has proven himself wrong by going with the big Belgian and altering his formation. Many a manager has been their own worst enemy due to their dogmatism and belief in their own methods. You only have to look at Chelsea and Maurizio Sarri to see how things can go quite badly wrong when you stick to your guns so vehemently. Nuno, as we know is a staunch supporter of his own tactics but he has relinquished himself from that dogma and seen the benefits of changing up the system a little. Subsequently, we’ve been as fluent going forward as we have ever been under his tutelage.

What more to say about the individuals preaching Nuno’s religion? Raul Jimenez, the indefatigable one, without any real standout characteristics but with a multitude of skills that are currently a match for any forward in the country. Jonny, like a dog on a leash at times out of possession, but with the sense of timing of a top-order international batsman playing a cover drive, when it comes to pressing and interceptions. So much of our good came from his interventions high up the pitch. Seamus Coleman and Theo Walcott must have been looking over their shoulder for the rest of the evening. Matt Doherty, once again impactful in the final third of the pitch. He still – somehow – has his detractors, but I implore someone to find me a more effective right-sided player in the Premier League right now. Go on, I dare you. And Diogo, our little Diogo. He gave two totem-like defenders in Michael Keane – who is awful, by the way – and Zouma a torrid time with his ferocity and willingness to run and drive and forage. I was a little disappointed to see his shot blocked prior to Dendoncker’s goal, such was the beauty of his cut inside Coleman.

If anything summed up this game though, it was the presence of a cat being given the freedom of Goodison Park. Everton players, management, stewards all stood and watched as it ran amok and made a mockery of a club in a period of stasis right now. Well, if that’s the level of urgency you show about getting back into a game you’re 3-1 down in, then please move aside while we show you what it means to make an assault on the Top 6.

3 thoughts on “Daylight in Seventh – Everton (A)”