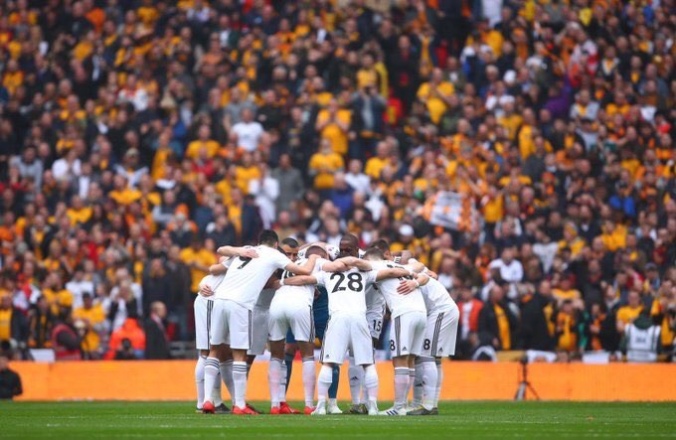 This might sound strange, but I’ve not been looking forward to this one. I’ve been mulling over just how I attempt to sum up the season that has just passed and I’ve come up pretty blank so far. Well, it’s pretty fair to say we’ve not experienced anything like this, so maybe it’s fair to be at a bit of a loss right now. Let’s just take a look at all of the things we’ve witnessed for the first time in the Premier League though, just to paint a little bit of a picture of what I mean:

If that all feels a little bit surreal, when you condense it into such a list, it’s actually mind-boggling when you realise this all happened over the course of one campaign. As a newly-promoted club. It’s not always the natural instinct to step back and take stock of such situations. We’re on a ride that we’re thoroughly enjoying, that is creeping higher and higher and higher. Peeping outside of the carriage to see how far the drop is could be a little disconcerting. I mean, clubs wait years to experience such a roll call of success and achievement and some still never realise those ambitions. Hell, this felt like a pipe dream to most of us, even as recently as Fosun taking over the club,

But we’ve gone from 0-100 in no time at all, the kind of progression many may even call out as unsustainable. The splashing of cash is no newfangled approach to taking on the Premier League challenge, but it has its pitfalls, which have been well documented down on the River Thames. What you really need is a solid foundation of nous, work ethic and all-round quality in a number of areas. This is why we’re in good hands.

From social media, to the medical department and on the pitch itself, Wolves have been near class-leading. This is why we should all be believing the hype where this club is concerned. We have improved dramatically in pretty much every single way. I mean, I noticed that they even take card payments in the family enclosure these days.

But football clubs are driven by the football and I know for sure if we’d been a more functional, less erudite footballing side, there would have been a little less love in the air. The fact we have such an easy way about us, with style, panache and a whole lot of substance too just creates a sense that we may just be the most content fans in the country.

I am beginning to feel a little like a broken record now, but this is all strung nicely together by Nuno Espirito Santo. This man, with the velvety voice, the wisdom beard and the commanding presence who oozes confidence and charisma has taken this club into the stratosphere on his and Fosun’s shoulders. It’s never easy to quite put your finger on what it is about a person in the limelight the way he is that encapsulates the masses. I’m sure Nuno himself doesn’t really know, especially because he’s not one to actively seek publicity. The training ground, the dugout, the technical area are his sanctuaties, and have been for years given his existence generally as a reserve goalkeeper. It’s an awkward existence for a footballer and there have been many occasions of Nuno behaving in such a way when questioned int he media. Yet still, he seems to mesmerize.

His players also, seem to be under his spell. I’m loathe to reduce the analysis of this side to numbers and there are plenty of people who will be doing that, but the 3-4-3 and the 3-5-2 isn’t even half the story. We’ve rightly grabbed the plaudits from all and sundry this season for the bewitching way with which we spring into attack, but all good sides lay their foundations at the back. If anything, the goals scored column is the one that requires attention, ahead of the goals against field.

At which point we should probably start to look ahead, to gaze into the distance at what lies on the horizon for this famous old club. I liken our journey to climbing a mountain, where you may find a number of beauty spots on the way. I feel like Jeff Shi, Laurie Dalrymple and Nuno are all leading us skywatds, and while we may stop to bask in the glory of the view, they keep foraging their way forward.  You really do get the feeling they will not stop until they plant that gold and black flag into the ground at the summit.

Shi has spoken of the ‘natural progression’ of stepping into Europe for the first time in generations next season. Yes, it extends our season beyond anything we’ve experienced before. Yes, we’ll be clocking  up air miles, contesting the dreaded Thursday-Sunday schedule. But he’s right – I mean what else should we be aspiring to? Manchester United have had a dog of a season and there was still a nine-point gap between us and them. The Top Six will be the toughest nut to crack for Fosun, as it should be, but Europe will provide an exciting subplot to it all.

One thing we can firmly discount, is that we are not Burnley. This is not a team susceptible to any lack of ambition with regards to this competition and the absolute aim for the Premier League must be another Top 7 finish. Having beaten each and every one of the European finalists this season, who’s to say we can’t make significant progress? Squad depth will need to be addressed, but players like Ivan Cavaleiro, Adama Traore and Helder Costa are all capable enough of contributing across each of the arenas we’ll be operating in next season and the more they play, the more we will get out of them I suggest.

What we cannot afford to disrupt is the equilibrium that clearly exists between all in the squad. We’ve had our fingers burnt by comparatively big-name, big-money signings in the past and there is always the potential for a signing to derail the kind of harmony we have, fostered over months and years. I have no doubt that the recruitment team will have done their due diligence on any potential targets, but this is the real beauty of players like Raul Jimenez and Joao Moutinho – they comply with the ‘No D***head’ policy that is clearly in place.

European football isn’t just about the football of course. This is the next stage of the Wolves branding exercise, something that is already bearing fruit. I have spoken of my travels with work and the high esteem the club appears to be held currently. Waves are being made and this isn’t with the backdrop of human rights atrocities or nefarious dealings by the ownership. This isn’t the conversation anymore. Wolves are just a good side going about their business in an enviable manner.

So how exactly do you look back on this season? Well, you just don’t now. On to the next season, otherwise, you’re going to get left behind.

I’ll take a more in-depth look at individual performances from this season next week, so keep an eye out for that, which is where I will sign off for the summer.